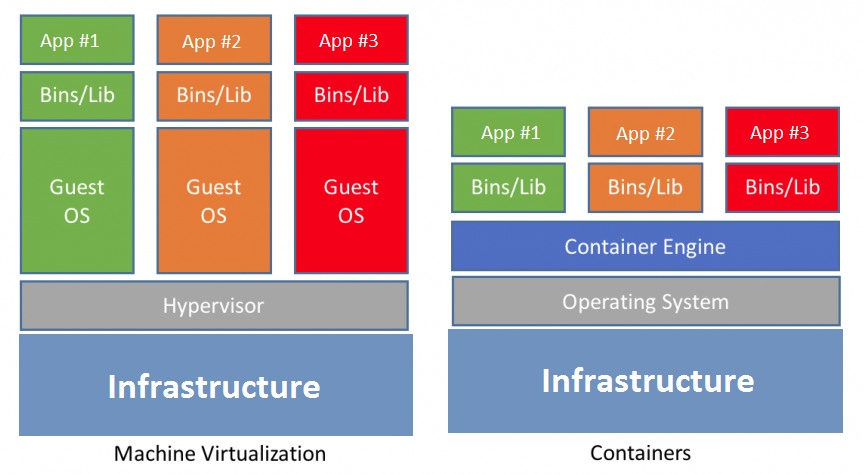 This tutorial will brief you the main differences between Containers and VMs (Virtual Machines). As you all know that containers have become a dominant technology term in Cloud native application development. So it is good to know to understand why containers become popular compared to VM’s.

What is a Virtual Machine (VM) ?

Virtual Machines (VMs) are the technology that is used to build virtualized computing environments. Virtualization technology has been there quite sometime and they are considered as the foundation for Cloud Computing in the beginning. In computing, a Virtual Machine (VM) is an emulation of a physical computer.

Using VMs you can run multiple machines with multiple OS on a single physical machine. And VM’s communicate with physical machines using lightweight software layers called Hypervisors. Hypervisors could separate VMs from each other and allocate resources separately for each of them.

Operating System Kernel allows the existence of multiple isolated user space instances. Such  instances are called Containers (Docker). Containers are isolated from one another and bundle their own software, libraries and configuration files. Individual containers can communicate with each other through we-defined channels.

Containers are a light-weight, more agile way of handling virtualization. Instead of spinning up entire virtual machine with all the resources, a container just bundles their own software and required dependencies in one package as small piece of software.

In simpler terms, we can say containers uses OS-Level Virtualization to isolate the processes and control the processes’s access to resources.

Difference between Containers and VMs

In traditional virtualization, a hypervisor virtualizes physical hardware and each VM (Virtual Machine) contains guest OS, a virtual copy of hardware, an application and other associated dependencies and libraries. Instead of virtualizing the underlying hardware or infrastructure, containers uses OS-Level Virtualization, so each individual containers has it’s own application and its libraries and dependencies.

Containers are not just a file system, they always run with a command and this command run processes in isolation. This is classically known as linux containerization O-LXC (OS-level LinuX Containers) which is where the container originally comes from.

The following are the main differences or highlights about containers and VMs.