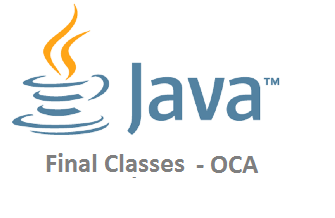 A final keyword means the class cannot be subclassed. In other words, no other class can ever extend a final class. And many of the Java standard library classes are final, such as java.lang.System  and java.lang.String .

When you would mark a class final ?

You should make a final class only if there is need for you that none of the methods in that class should be overridden i.e., when you need security so that nobody could change the implementation that you made.

Marking your class final also means that the class you wrote will never be improved upon by any other programmer.

Benefits of having nonfinal classes

Let’s say there is a problem with a method in a final class that you have written. And another programmer who is using your code don’t have the source code. So that programmer can’t modify the source to improve the method.

A final class will loose the main benefit of OO -extensiblity. In practice you will never make a final class. Unless you have a serious safety or security issue then don’t mark a class final.