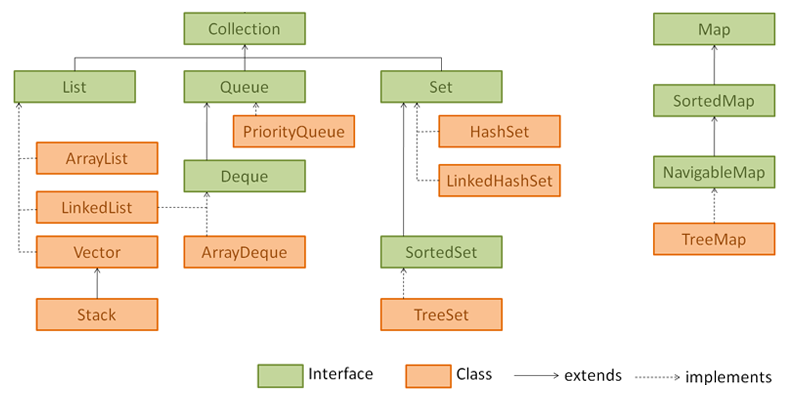 A “collection” object sometimes called a container is simply an object that groups multiple elements into a single unit. Collections are used to store, retrieve, manipulate, and communicate aggregate data.

Another meaning for “Collection” is it’s an java.util interface from which Set, List etc., interfaces can extend

What is Collections Framework ?

A collections framework is a unified architecture for representing and manipulating collections.

All collections framework contain the following

What are the benefits of collections framework ?

Interfaces allow collections to be manipulated independently of the implementation details of their representation, which is called the polymorphic behavior.

In Java programming language (and other object-oriented languages), interfaces generally form a hierarchy. You choose one that meets your need as a type.

Implementations are the data objects used to store collections, which implement the interfaces.

The types of implementations are:

These are the methods that perform useful computations, such as searching and sorting, on objects, which implement collection interfaces.

The algorithms are said to be polymorphic that is, the same method can be used on many different implementations of the appropriate collection interface. In essence, algorithms are reusable functionality.

The hierarchy of core collection interfaces (highlighted green) are shown in the following figure.